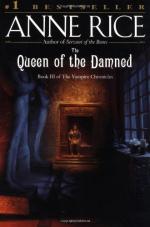 The Queen of the Damned | Criticism

Anne Rice
This literature criticism consists of approximately 4 pages of analysis & critique of The Queen of the Damned.

In the following review, Kraft offers tempered assessment of The Queen of the Damned. According to Kraft, Rice's “enormous ability” as a novelist is “wasted on vampires.”

When last we saw him, in the second book of Anne Rice's vampire chronicles, the vampire Lestat was a rock star, flaunting his evil ways before a horde of screaming mortal fans in San Francisco, sweating blood under hot lights. Then suddenly he was being attacked—not by Tipper Gore and her committee for cleaner language in popular music, but by a gang of the undead, bent on destroying him because his lyrics and autobiography named names and revealed secrets. Just in the nick of time, though, Lestat hopped into his Porsche and fled into a gap between installments.

The Queen of the Damned...

Critical Review by Eric Kraft from Gale. ©2005-2006 Thomson Gale, a part of the Thomson Corporation. All rights reserved.