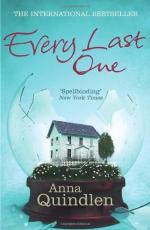 This literature criticism consists of approximately 12 pages of analysis & critique of Anna Quindlen.

In the following review, Lehrman notes the limitations on Quindlen's brand of writing, both in her novel Object Lessons and in her columns.

For nearly three years devoted readers turned weekly to Anna Quindlen's “Life in the 30's” column in “The Living Section” of The New York Times for updates on her life (lawyer husband, two sons, Victorian rowhouse in Hoboken), reflections on her past (Catholic schooling, mother's death), and her feelings about being female. Quindlen was the thirtysomething girl next door, chatting about the ordinary and often intimate details of her life. The column was continually praised for its honesty, ingenuity, and courage, and when it stopped running in 1988 her fans wrote letters expressing hurt, anger, betrayal.

But she needed a break; covering herself was “emotionally exhausting.” So she had another baby and wrote a novel...

Critical Review by Karen Lehrman from Gale. ©2005-2006 Thomson Gale, a part of the Thomson Corporation. All rights reserved.