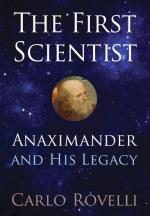 This literature criticism consists of approximately 23 pages of analysis & critique of Anaximander.

In the following excerpt, McKirahan describes Anaximander 's major contributions in the fields of astronomy, cartography, and natural philosophy.

If Anaximander was sixty-four in 546, as our best source1 says, he was twenty-five at the time of Thales' eclipse, which agrees with the tradition that he was Thales' successor in investigating nature. His picture of KOSMOS and his ways of thought can be gleaned from the surviving information (including one fragment) on his physical speculations.

5.1 He was the first to discover the gnomon and set one up on the sundials at Sparta … indicating the solstices and equinoxes, and he constructed hour-markers.

A gnomon (originally "carpenter's square") is the raised piece whose shadow indicates the sun's position...

More summaries and resources for teaching or studying Anaximander.