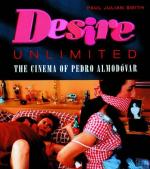 Get Critical Essay by Marvin D'Lugo from Amazon.com
View the Study Pack

This literature criticism consists of approximately 30 pages of analysis & critique of Pedro Almodóvar.

In the following essay, D'Lugo discusses the image of Madrid and Spain's past and present in Almodóvar's films.

Madrid has figured prominently in Pedro Almodóvar's cinema, gradually coming into focus as the implicit protagonist of nearly every work. In these films, the city is regularly imaged as a cultural force, producing forms of expression and action that challenge traditional values by tearing down and rebuilding the moral institutions of Spanish life: the family, the Church, and the law.

Inspired by the conventions of cinematic representation of the city in film and, most pointedly, American filmic depictions of urban space, Almodóvar's city-scapes succeed in imitating the American cinema's unself-conscious universalization of particular milieus as the natural mise-en-scène of action. In the context of a cinema...

More summaries and resources for teaching or studying Pedro Almodvar.

Critical Essay by Marvin D'Lugo from Gale. ©2005-2006 Thomson Gale, a part of the Thomson Corporation. All rights reserved.