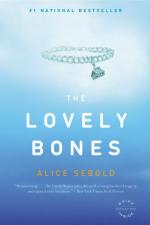 Get Critical Essay by Charlotte Abbott from Amazon.com
View the Study Pack
View the Lesson Plans

Alice Sebold
This literature criticism consists of approximately 9 pages of analysis & critique of The Lovely Bones.

In the following essay, Abbott chronicles The Lovely Bones's path to success and describes the marketing and publicity efforts behind the novel.

With an impressive 925,000 copies in print after 11 printings, Alice Sebold's The Lovely Bones has outpaced the sales of any other first novel in memory, reaching Oprah-level numbers in its first month on sale without the endorsement of any TV or newspaper book club. Booksellers are already comparing it to such long-running blockbusters as Arthur Golden's Memoirs of a Geisha and Charles Frazier's Cold Mountain, only to dismiss those examples in the same breath, because they took off much more slowly.

The book hit #1 on Amazon.com six weeks before its publication date, immediately after Anna Quindlen appeared on the Today Show for a summer reading roundup on May 22 and said. “If you read...

Critical Essay by Charlotte Abbott from Gale. ©2005-2006 Thomson Gale, a part of the Thomson Corporation. All rights reserved.