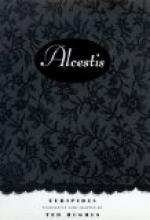 Get Critical Essay by Kiki Gounaridou from Amazon.com
View the Study Pack

In the following excerpt, Gounaridou surveys numerous twentieth-century critical interpretations of the meaning of the Alcestis and concludes that the scholarly indeterminacy she finds reflects the deliberately ambiguous nature of the play.

Apollo convinced the Fates to allow Admetus, who was condemned to die shortly, to find a voluntary substitute to die in his place. Alcestis, Admetus' wife, offered herself, when neither of the parents wished to die for their child. A short while after this disaster, Heracles visited Admetus' palace and a servant told him what had happened. Heracles went to Alcestis' grave, fought Death away, covered the woman with a veil, brought her back to Admetus, told him that she was given to him as a prize...

Critical Essay by Kiki Gounaridou from Gale. ©2005-2006 Thomson Gale, a part of the Thomson Corporation. All rights reserved.