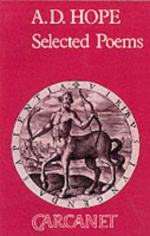 Get Critical Review by Fay Zwicky from Amazon.com
View the Study Pack

This literature criticism consists of approximately 9 pages of analysis & critique of A. D. Hope.

In the following review of A Late Picking, Zwicky discusses Hope's reputation as a poet in Australia and elucidates the central themes in his verse.

When A. D. Hope asked this question in ‘Pyramis or The House of Ascent’ in 1948, he was trying to reconcile the ambiguity of the creative consciousness in the image of the Egyptian Pharaoh: the artist/priest snagged in tension between the heart's passions and that clear-sighted perception of illusion which cuts him off from other human beings. In this early poem the artist's work becomes a monument to his self-assertion in a spiritual wasteland, and there was some admiration implied for ‘those...

Critical Review by Fay Zwicky from Gale. ©2005-2006 Thomson Gale, a part of the Thomson Corporation. All rights reserved.