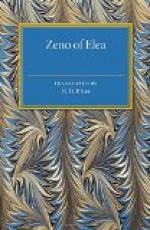 Get Zeno of Elea from Amazon.com
View the Study Pack

This Biography consists of approximately 2 pages of information about the life of Zeno of Elea.

Encyclopedia of World Biography on Zeno of Elea

Zeno of Elea (born ca. 490 BC) was a Greek philosopher and logician. A member of the Eleatic school of philosophy, he was famous throughout antiquity for the rigorously logical and devastating arguments which he used to show the absurdities and contradictions of his opponents.

Zeno was born in the southern Italian city of Elea. Plato says that Zeno and Parmenides visited Athens about 449 B.C., where the young Socrates made their acquaintance and where Zeno made a striking impression. Ancient authorities asserted that, like Parmenides, Zeno was a Pythagorean, that he engaged in political activity in his native city, and that he was put to death for plotting against a tyrant. An oft-repeated story tells of his bravery under torture and the painful death which he endured.

It is possible that Zeno wrote more than one work, but he is best known for a single volume of epicheiremata (attacks) on the postulates of Parmenides's opponents. Only fragments of this work have survived, but a fairly clear idea of his methods may be found in the summaries given by Aristotle and the 6th-century A.D. Neoplatonist Simplicius. Zeno seems to have had no constructive theories of his own to set forth, and some of his destructive arguments seem to apply equally well to the conclusions drawn by Parmenides.

Zeno's original contribution to thought was the method of deduction which he developed to work out two sets of contradictory conclusions from a given postulate. From his argument against the pluralists, the following example is typical. Let it be postulated that everything has developed from an originally plural source (as opposed to Parmenides's One). If things are many, then they are finite since they are the number that they are. But if things are many, they are infinite since there must always be other things between them, and others between those ad infinitum.

From Zeno's arguments on motion comes the famous example which shows the impossibility of ever reaching the end of a given line. A moving body cannot reach the end because it must constantly reach the midpoint, and then another midpoint, again ad infinitum. It is unclear from the available evidence if Zeno's purpose was to offer a serious defense of the One or if he simply wanted to show that other arguments were no better. Aristotle called him the inventor of dialectic, and Zeno was undoubtedly one of the important early Greek logicians.

More summaries and resources for teaching or studying Zeno of Elea.

Zeno of Elea from Gale. ©2005-2006 Thomson Gale, a part of the Thomson Corporation. All rights reserved.