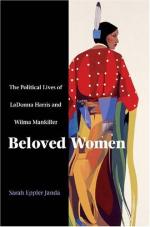 Get Wilma Mankiller from Amazon.com
View the Study Pack

This Biography consists of approximately 5 pages of information about the life of Wilma Mankiller.

Wilma Mankiller (born 1945) became active in Native American causes in San Francisco in the late 1960s and early 1970s and gained skills in community organization and program development. With 56 percent of the vote, Mankiller became the first woman elected Cherokee principal chief in the historic Cherokee election of 1987.

Wilma Pearl Mankiller is both the first woman Deputy Chief and first woman Principal Chief of the Cherokee Nation of Oklahoma. She overcame many personal tragedies and returned home to Mankiller Flats, Oklahoma, to establish herself as a political power working for the betterment of all people. Mankiller was born at Tahlequah, the capitol of the Cherokee Nation, in November 1945, and was raised until she was ten years old at Mankiller Flats. Her father was Charlie Mankiller, Cherokee, and her mother was Irene Mankiller, Dutch-Irish. She had four sisters and six brothers.

Mankiller's great-grandfather was one of...

More summaries and resources for teaching or studying Wilma Mankiller.

Wilma Mankiller from Gale. ©2005-2006 Thomson Gale, a part of the Thomson Corporation. All rights reserved.