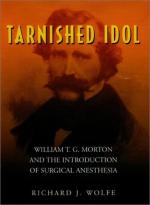 This Biography consists of approximately 2 pages of information about the life of William Thomas Green Morton.

The American dentist William Thomas Green Morton (1819-1868) was an early experimenter with anesthesia.

William Morton was born on Aug. 9, 1819, in Charlton, Mass. He went to Boston at the age of 17 to try a career in business, but after several years he took up the study of dentistry at the Baltimore College of Dental Surgery.

In 1842 Morton began his practice in Farmington, Conn., where he met Horace Wells, a dentist who was interested in anesthesia and who was to experiment later with nitrous oxide gas. They set up a practice together in Boston, but it was dissolved after a few months. Morton then entered Harvard in 1844 to study for a medical degree but left because of financial pressures and his marriage that year to Elizabeth Whitman.

Morton resumed his dental practice and began to concentrate on manufacturing and fitting artificial teeth, work which led him to consider using...