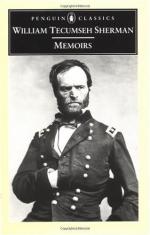 Get William Tecumseh Sherman from Amazon.com
View the Study Pack

This Biography consists of approximately 3 pages of information about the life of William Tecumseh Sherman.

William Tecumseh Sherman (1820-1891), American soldier, was a Union general during the Civil War. He captured Atlanta and Savannah and wrought great destruction in marches through Georgia and the Carolinas.

William T. Sherman was born in Lancaster, Ohio, on Feb. 8, 1820. After his father died, "Cump," as he was known, was raised by the Thomas Ewings. Sherman attended the U.S. Military Academy at West Point, graduating in 1840. He served in the Second Seminole War (1840-1842). Stationed in California during the Mexican War, he had little chance for combat honor, although he was awarded one brevet. He resigned from the Army on Sept. 6, 1853, and entered civilian life, working in banks in California and New York City. He also practiced law unsuccessfully in Kansas and was superintendent of a military academy at Alexandria, La. (now Louisiana State University), when the Civil War came.

William Tecumseh Sherman from Gale. ©2005-2006 Thomson Gale, a part of the Thomson Corporation. All rights reserved.