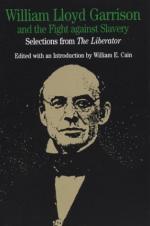 Get William Lloyd Garrison from Amazon.com
View the Study Pack

This Biography consists of approximately 4 pages of information about the life of William Lloyd Garrison.

William Lloyd Garrison was born on Dec. 10, 1805, in Newburyport, Mass. His father deserted the family in 1808, and the three children were raised in near poverty by their mother, a hardworking, deeply religious woman. Young Garrison lived for a time in the home of a kindly Baptist deacon, where he received the bare rudiments of an education. He was later apprenticed to a shoemaker, a cabinetmaker, and finally to the printer and editor of the Newburyport Herald.

Garrison borrowed money in 1826 to buy part of the Newburyport Free Press; it soon failed. He worked as a printer in Boston and in 1827 helped edit a temperance paper, the National Philanthropist. Seeing life as an uncompromising moral crusade against sin, and believing it possible to perfect a Christian society...

William Lloyd Garrison from Gale. ©2005-2006 Thomson Gale, a part of the Thomson Corporation. All rights reserved.