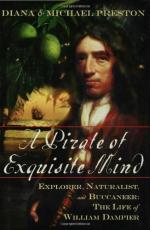 Get William Dampier from Amazon.com
View the Study Pack

This Biography consists of approximately 2 pages of information about the life of William Dampier.

The English privateer and author William Dampier (1652-1715) explored the Western Australian coastline and stimulated interest in the Pacific through popular travel books.

William Dampier was born the son of a Somerset farmer in June 1652. He sailed to Newfoundland and the East Indies while still a boy and took part in the Third Dutch War (1672-1674). After a brief sojourn in Jamaica as undermanager of a plantation, he joined the buccaneers of the Caribbean in Capt. Morgan's heyday. In 1686 Capt. Swan of the Cygnet, in which Dampier was sailing, decided to seek prizes in the Pacific before returning to England. After spending 6 months in the Philippines, Swan's crew seized the ship and cruised in Far Eastern waters between China and Australia. Dampier accordingly spent the summer of 1688 at King Sound in Western Australia. After being marooned on one of the Nicobar Islands, he traveled by native canoe to Sumatra and served as a gunner at Bencoelen before returning to England.

Dampier recorded details of his amazing adventures along with navigational data in a diary on which he based A New Voyage round the World (1697) and Voyages and Descriptions (1699). Impressed with his work, the English Admiralty commissioned him with the rank of captain to command an expedition to explore the Australian coastline. He reached Shark Bay, Western Australia, in August 1699, and using Tasman's charts, he sailed up the coast for a month seeking an estuary. After revictualing at Timor, he proceeded along the north coast of New Guinea and discovered New Britain but abandoned plans to explore the east coast of Australia because his ship, the H. M. S. Roebuck, was in poor condition. On the way home, the Roebuck was lost off Ascension Island, and the crew were rescued by returning East India men.

A court-martial in 1702 found Dampier unfit to command a naval vessel. During the next 4 years he led an unsuccessful privateering expedition in the South Seas. Between 1708 and 1711 he again sailed around the world as pilot for Capt. Woodes Rogers, a privateer sponsored by Bristol merchants. It was on this voyage that Alexander Selkirk, who had previously been marooned by the crew of a ship under Dampier's command, was picked up at one of the Juan Fernández Islands in the South Pacific. Dampier died in London in March 1715 before receiving his share of the expedition's spoils.

More summaries and resources for teaching or studying William Dampier.

William Dampier from Gale. ©2005-2006 Thomson Gale, a part of the Thomson Corporation. All rights reserved.