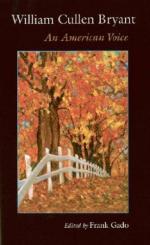 This Biography consists of approximately 3 pages of information about the life of William Cullen Bryant.

The American poet and newspaper editor William Cullen Bryant (1794-1878) helped introduce European romanticism into American poetry. As an editor, he championed liberal causes. He was one of the most influential and popular figures of mid-19th-century America.

William Cullen Bryant was born on Nov. 3, 1794, in Cummington, Mass. His well-established New England family was staunchly Federalist in politics and Calvinist in religion. Encouraged to write poetry by his father, a physician of wide learning, the boy reflected in his earliest poems his family's political and religious attitudes. Bryant's Federalist satire on Thomas Jefferson, The Embargo, or Sketches of the Times (1808), by a "Youth of Thirteen" was published through his father's influence. In later years the liberal, democratic, Unitarian Bryant understandably wished to forget this youthful indiscretion, and he did not reprint it in any of his collections.

"Thanatopsis" and Other Poems

William Cullen Bryant from Gale. ©2005-2006 Thomson Gale, a part of the Thomson Corporation. All rights reserved.