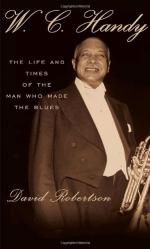 Get William Christopher Handy from Amazon.com
View the Study Pack

This Biography consists of approximately 2 pages of information about the life of William Christopher Handy.

The African American songwriter William Christopher Handy (1873-1958), known as the father of the blues, was the first person to notate and publish blues songs. He wrote over 60 blues, spirituals, and popular tunes.

On Nov. 16, 1873, W. C. Handy was born in Florence, Ala., the son of two Methodist ministers. He studied at Kentucky Musical College, to the dismay of his father, who regarded secular music as a branch of the devil's activities. At an early age he left home to tour with a minstrel show. As a bandleader for Mahara's Minstrels for much of the period between 1896 and 1903, he first made contract with early blues and jazz. He moved to Memphis, Tenn., and led a band that featured his attempts to incorporate blues tunes and jazz motifs into written arrangements.

Handy is a somewhat enigmatic figure; in his lifetime he was bitterly accused by some musicians of plagiarism. It seems probable that he was less the original composer he claimed to be, more a sensitive collector of traditional material. Even if this is the case, his services as a folklorist should not be minimized; probably no one else has preserved such a wealth of blues material. As a performing musician, Handy was a competent instrumentalist in the European tradition, with no apparent ability as a jazz soloist.

Handy formed his own music publishing business in 1913. This, plus the royalties from his songs, brought him considerable wealth. But in the 1930s his sight began to fail, and by 1943 he was totally blind. In his later years he worked unceasingly for his W. C. Handy Foundation for the Blind and other charitable organizations.

His first wife, Elizabeth Price, with whom he had six children, died in 1937. In 1954, at the age of 80, he married again. He was honored by having a theater and a park in Memphis, and a library in Philadelphia, named after him during his lifetime. He died in 1958; in 1959 the W. C. Handy 6-cent postage stamp was issued.

William Christopher Handy from Gale. ©2005-2006 Thomson Gale, a part of the Thomson Corporation. All rights reserved.