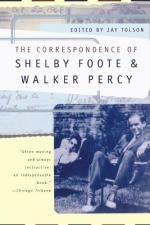 Get Walker Percy from Amazon.com
View the Study Pack

This Biography consists of approximately 6 pages of information about the life of Walker Percy.

Walker Percy (1916-1990) won the National Book Award for fiction in 1961 for his first published novel, The Moviegoer. In five subsequent novels and numerous essays, he explored his chosen theme of "the dislocation of man in the modern age." His work combined a distinctly southern sensibility with existential philosophy and a deeply-felt Catholicism.

Walker Percy was born in Birmingham, Alabama, on May 28, 1916. He was a descendant of a distinguished Mississippi Protestant family that counted congressmen and Civil War heroes among its members. Before he was born, Percy's grandfather killed himself with a shotgun, setting a pattern of tragic death that would haunt the boy throughout his life.

In 1929, Percy's father committed suicide with a shotgun. Percy, his mother, and his two brothers, Phin and Roy, then moved to Athens, Georgia. Two years later, Percy's mother was killed when she drove her car off a country bridge...

More summaries and resources for teaching or studying Walker Percy.

Walker Percy from Gale. ©2005-2006 Thomson Gale, a part of the Thomson Corporation. All rights reserved.