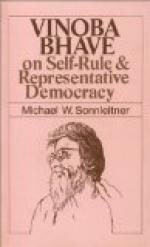 Get Vinoba Bhave from Amazon.com
View the Study Pack

This Biography consists of approximately 2 pages of information about the life of Vinoba Bhave.

Vinoba Bhave (1895-1982) was an Indian nationalist and social-reform leader who inherited Mahatma Gandhi's spiritual mantle. Bhave's most notable contribution was the creation of the bhoodan (land gift) movement.

Vinayak Bhave, renamed with the affectionate diminutive "Vinoba" by Mahatma Gandhi, was born on Sept. 11, 1895, into a high-ranking Chitapavan Brahmin family in Gagode village, south of Bombay. His father, a textile technologist, worked for the princely state of Baroda. Bhave credited his grandfather and his mother for his strong religious orientation.

Bhave's education was concentrated in modern subjects, and he excelled in mathematics. He nonetheless left college in 1916 and started his spiritual quest. He began studying Sanskrit in Benares but within three months joined Gandhi's independence movement.

Constructive work and social reform were vital parts of the nationalist movement. Bhave excelled in confronting basic social and economic problems, and he made mass contact with the Indian...

More summaries and resources for teaching or studying Vinoba Bhave.

Vinoba Bhave from Gale. ©2005-2006 Thomson Gale, a part of the Thomson Corporation. All rights reserved.