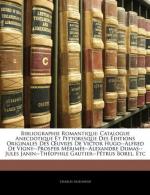 Get Vigny, Comte de from Amazon.com
View the Study Pack

This Biography consists of approximately 3 pages of information about the life of Vigny, Comte de.

Alfred Victor, Comte de Vigny (1797-1863), was one of the finest poets of French romanticism. His lengthy journal reveals his sensitive and aristocratic nature.

Alfred de Vigny was born at Loches on March 27, 1797, the son of Léon, Comte de Vigny, a 60-year-old wounded veteran of the Seven Years War, and Marie Jeanne Amélie de Baraudin. After early education at home under his mother's influence and later training at the Pension Hix, where he spent three miserable years, and at the Lycée Bonaparte, Vigny was admitted at the age of 17 into an aristocratic corps of the Gendarmes Rouges. From 1816 to 1823 he served as an officer in the Royal Guard, but he became disillusioned with military life and in 1827 obtained his discharge from the army.

Meanwhile, Vigny's love affair with Delphine Gay had been broken up by his mother and...

Vigny, Comte de from Gale. ©2005-2006 Thomson Gale, a part of the Thomson Corporation. All rights reserved.