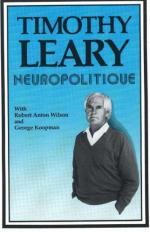 Get Timothy Leary from Amazon.com
View the Study Pack

This Biography consists of approximately 3 pages of information about the life of Timothy Leary.

Timothy Leary (1920-1996) was a psychologist, author, lecturer, and cult figure. He was best known for having popularized the use of mind-altering drugs in the 1960s.

Tuned In To LSD

At Harvard, Leary became interested in the properties of hallucinogenic drugs, notably a compound known as LSD (d-lysergic acid diethylamide). He and his colleague Richard Alpert were propagandists for...

More summaries and resources for teaching or studying Timothy Leary.

Timothy Leary from Gale. ©2005-2006 Thomson Gale, a part of the Thomson Corporation. All rights reserved.