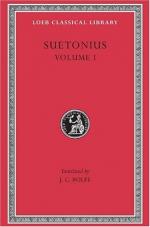 This Biography consists of approximately 2 pages of information about the life of Tiberius Julius Caesar Augustus.

Tiberius Julius Caesar Augustus (42 BC-AD 37) was successor to Augustus and second emperor of Rome. His reign is seen as a period of growth and consolidation of the power of the Julio-Claudian family.

Tiberius was born in Rome, both his parents being members of noted Roman patrician families. His father was Tiberius Claudius Nero; his mother was Livia, who later divorced Claudius to marry Octavian. Tiberius was, therefore, the stepson of the future emperor and later became both his adopted son and heir, as well as his son-in-law.

Tiberius was first introduced into public life at the age of 9, when he delivered a eulogy at his father's funeral. He entered the military service, performing ably and well, until suddenly, in 6 B.C., he retired to Rhodes, supposedly incensed because Augustus had chosen one of his grandsons as heir, passing over Tiberius.