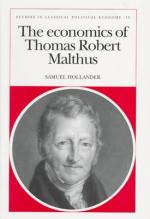 Get Thomas Robert Malthus from Amazon.com
View the Study Pack

This Biography consists of approximately 4 pages of information about the life of Thomas Robert Malthus.

The English economist Thomas Robert Malthus (1766-1834) was of the classical school and was the first to direct attention to the danger of overpopulation in the modern world.

Thomas Malthus was born at the Rookery near Guilford, Surrey, a small estate owned by his father, Daniel Malthus. After being privately educated, Malthus entered Jesus College, Cambridge, where he was elected to a fellowship at the age of 27. He took religious orders at the age of 31 and held a curacy for a short period.

In 1798 Malthus published his Essay on the Principle of Population. This pamphlet was turned into a fullscale book in 1803 with the aid of demographic data drawn from a number of European countries.

In 1805 Malthus married, and shortly thereafter he was appointed professor of modern history and political economy at the East India Company's College at Haileybury--the first appointment of its kind in England. Much to...

Thomas Robert Malthus from Gale. ©2005-2006 Thomson Gale, a part of the Thomson Corporation. All rights reserved.