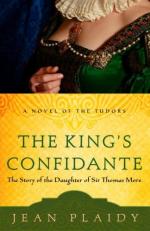 This Biography consists of approximately 4 pages of information about the life of Thomas More, Sir.

The life of the English humanist and statesman Sir Thomas More (1478-1535) exemplifies the political and spiritual upheaval of the Reformation. The author of "Utopia," he was beheaded for opposing the religious policy of Henry VIII.

Thomas More was born in London on Feb. 6, 1478, to parents whose families were connected with the city's legal community. His education began at a prominent London school, St. Anthony's. In 1490 Thomas entered the household of Archbishop John Morton, Henry VII's closest adviser. Service to Morton brought experience of the world, then preferment in 1492 to Oxford, where More first encountered Greek studies. Two years later he returned to London, where legal and political careers were forged. By 1498 More had gained membership in Lincoln's Inn, an influential lawyers' fraternity.

A broader perspective then opened. The impact of humanism in England was greatly intensified about 1500, partly by Erasmus's first visit. His biblical interests...

Thomas More, Sir from Gale. ©2005-2006 Thomson Gale, a part of the Thomson Corporation. All rights reserved.