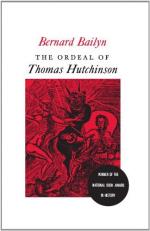 Get Thomas Hutchinson from Amazon.com
View the Study Pack

This Biography consists of approximately 3 pages of information about the life of Thomas Hutchinson.

Thomas Hutchinson (1711-1780), American governor of colonial Massachusetts and a staunch defender of English colonial policy, was also a jurist and historian.

Thomas Hutchinson was born in Boston on Sept. 9, 1711. He entered Harvard at the age of 12, graduating 3 years later. Entering his father's commercial house, Hutchinson continued to further his education through extensive reading. By the time he was 25 he was worth £5,000 and was part owner of a ship. On May 16, 1734, he married Margaret Sanford of Newport, R.I., who bore him three sons and two daughters before her death in 1753.

In 1737 Hutchinson was elected selectman for Boston. That same year he gained a seat in the Massachusetts House of Representatives, where he served every year, except 1739, and was speaker for 3 years (1746-1748) until his defeat in the election of 1749. In 1750 he was chosen a member of the governor's council (and served continuously until 1766). In...

More summaries and resources for teaching or studying Thomas Hutchinson.

Thomas Hutchinson from Gale. ©2005-2006 Thomson Gale, a part of the Thomson Corporation. All rights reserved.