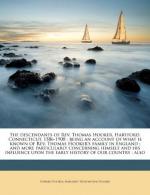 Get Thomas Hooker from Amazon.com
View the Study Pack

This Biography consists of approximately 2 pages of information about the life of Thomas Hooker.

Thomas Hooker was born in Leicestershire. After receiving a preparatory education, he attended Cambridge University, earning a bachelor of arts degree (1608) and a master of arts degree (1611). He remained as a fellow at the university until 1618, becoming a devout Puritan. In the 1620s Hooker served a congregation in Essex, where he became widely known for his excellent preaching. Because of his Puritan views, however, he attracted the attention of the Anglican authorities, who forced him to leave England. He eventually settled in Rotterdam, Holland, and here he received the call to the ministry of the Newtown (Cambridge) congregation in the American colony of Massachusetts.

Hooker was never happy in Newtown. His congregation was dissatisfied with its land; the religious challenges posed by Roger Williams and Anne Hutchinson were shaking the colony; and, most significantly, Hooker found himself incompatible with the leaders of Massachusetts. In 1636 the Newtown congregation received permission to emigrate, and Hooker led a majority of them to Connecticut.

The Hartford Church, under Hooker's pastorate, was exemplary for its lack of discord and controversy. Hooker was a humane and understanding clergyman. He made an outstanding contribution to the colony in a sermon in which he applied the principles of Congregationalism to political organization. Used as the basis for the Fundamental Orders, the sermon emphasized the election of public officials and the limitation of their power by the electorate. While Hooker's ideas seemed highly democratic, they were strictly qualified. His "people" were limited to full participating members of the Puritan church, and his emphasis on the responsible use of power precluded unrestrained popular rule.

Hooker did not differ with orthodox New England Puritanism, although he practiced these beliefs with more humanity than his clerical colleagues. While living in Newtown, he had debated Roger Williams, and after moving to Connecticut, he returned to Massachusetts to serve on the court that tried Anne Hutchinson for heresy. His pamphlet "A Survey of the Summed of Church-Discipline," is an excellent explanation and defense of New England Congregationalism. Hooker retained his Hartford pastorate until his death on July 7, 1647.

More summaries and resources for teaching or studying Thomas Hooker.

Thomas Hooker from Gale. ©2005-2006 Thomson Gale, a part of the Thomson Corporation. All rights reserved.