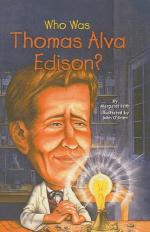 Get Thomas Alva Edison from Amazon.com
View the Study Pack

This Biography consists of approximately 5 pages of information about the life of Thomas Alva Edison.

The American inventor Thomas Alva Edison (1847-1931) held hundreds of patents, most for electrical devices and electric light and power. Although the phonograph and incandescent lamp are best known, perhaps his greatest invention was organized research.

Thomas Edison was born in Milan, Ohio, on Feb. 11, 1847; his father was a jack-of-all-trades, his mother a former teacher. Edison spent 3 months in school, then was taught by his mother. At the age of 12 he sold fruit, candy, and papers on the Grand Trunk Railroad. In 1862, using his small handpress in a baggage car, he wrote and printed the Grand Trunk Herald, which was circulated to 400 railroad employees. That year he became a telegraph operator, taught by the father of a child whose life Edison had saved. Exempt from military service because of deafness, he was a tramp telegrapher until he joined Western Union Telegraph Company in Boston in 1868.

Thomas Alva Edison from Gale. ©2005-2006 Thomson Gale, a part of the Thomson Corporation. All rights reserved.