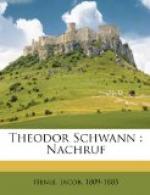 Get Theodor Schwann from Amazon.com
View the Study Pack

This Biography consists of approximately 3 pages of information about the life of Theodor Schwann.

The German biologist Theodor Schwann (1810-1882) is considered a founder of the cell theory. He also discovered pepsin, the first digestive enzyme prepared from animal tissue, and experimented to disprove spontaneous generation.

Contributions to Physiology and Anatomy

At the University of Berlin, Schwann again came into contact with Müller, who convinced him that he should follow a scientific career. Very soon after he began to work under Müller, he had his first success. From...

More summaries and resources for teaching or studying Theodor Schwann.

Theodor Schwann from Gale. ©2005-2006 Thomson Gale, a part of the Thomson Corporation. All rights reserved.