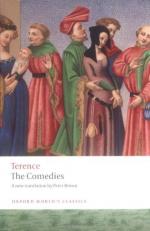 Get Terence from Amazon.com
View the Study Pack

This Biography consists of approximately 5 pages of information about the life of Terence.

Encyclopedia of World Biography on Terence

Terence (195-159 BC), or Publius Terentius Afer, was a Roman comic playwright. As a translator and adapter of the Greek New Comedy, produced about 336-250 BC, he gave near-perfect form and expression in Latin to the comedy of manners.

Information about the life of Terence is based mainly on two sources: the prologues of Terence's plays, in which he defends himself against hostile criticism, and a life of Terence written by Suetonius (ca. A.D. 70-ca. 135) and preserved in Donatus's commentary on the plays of Terence.

The prologues provide few facts, and the brief biography is filled with contradictions. Suetonius, like other ancient biographers, gathered his information from earlier sources and undoubtedly filled out the account with inferences from Terence's plays, conventional themes, and anecdotes.

Basically accepted by most scholars is that Terence was born in Carthage and brought to Rome as a slave while quite young. Since...

More summaries and resources for teaching or studying Terence.

Terence from Gale. ©2005-2006 Thomson Gale, a part of the Thomson Corporation. All rights reserved.