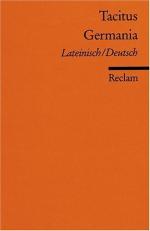 Get Tacitus from Amazon.com
View the Study Pack

This Biography consists of approximately 5 pages of information about the life of Tacitus.

Encyclopedia of World Biography on Tacitus

Tacitus (c. 56/57-ca. 125) was a Roman orator and historian. In a life that spanned the reigns of the Flavian emperors and of Trajan and Hadrian, he played a part in the public life of Rome and became its greatest historian.

Tacitus was born into a wealthy family of equestrian status. It is not known for certain where his home was, but he probably came from one of the towns of Gallia Narbonensis (modern Provence). His father had been an imperial official, holding the important post of procurator (chief financial agent) for Gallia Belgica, and he was clearly able to give his son an excellent education.

In 77 the young Tacitus was betrothed to, and soon after married, the only daughter of Gnaeus Julius Agricola, an able soldier and administrator. Although not himself of aristocratic birth, Tacitus was allowed by the emperor Vespasian to start on a political...

More summaries and resources for teaching or studying Tacitus.

Tacitus from Gale. ©2005-2006 Thomson Gale, a part of the Thomson Corporation. All rights reserved.