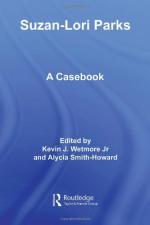 Get Suzan-Lori Parks from Amazon.com
View the Study Pack

This Biography consists of approximately 7 pages of information about the life of Suzan-Lori Parks.

Authors and Artists for Young Adults on Suzan-Lori Parks

Suzan-Lori Parks won the Pulitzer Prize for drama in 2002, becoming the first black female playwright to be awarded the prestigious award. After winning the prize, she told Angeli R. Rasbury on the Women's eNews Web site, "As the first African-American woman to win the Pulitzer Prize [for theater], I have to say I wish I was the 101st."

Plays by Parks include Imperceptible Mutabilities in the Third Kingdom and Topdog/Underdog. The latter play opened at the Off-Broadway theater Joseph Papp Public Theater and later moved to a Broadway house. It was for this play that Parks won the Pulitzer. It is also the first play with more than one actor by a black woman to run on Broadway since for colored girls who have considered suicide/when the rainbow is enuf by Ntozake Shange opened in 1976.

More summaries and resources for teaching or studying Suzan-Lori Parks.

Suzan-Lori Parks from Gale. ©2005-2006 Thomson Gale, a part of the Thomson Corporation. All rights reserved.