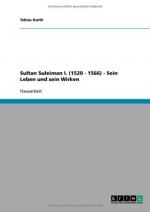 Get Suleiman, I from Amazon.com
View the Study Pack

This Biography consists of approximately 5 pages of information about the life of Suleiman, I.

Encyclopedia of World Biography on Suleiman, I

Suleiman I (1494-1566) was the tenth ottoman sultan, known to the Turks as Kunani, or lawgiver, and to the Western historians as "the Magnificent." He ruled the Osmanli empire with undisputed strength and brilliance.

The only son of Selim I, Suleiman attended the palace school and served his apprenticeship as a governor, first at Bolu, where he was assigned when about 15, later at Kaffa, the homeland of his mother, daughter of a Crimean Tatar khan. He also supervised the state when his father was campaigning. In education and experience Suleiman surpassed every European ruler of his day.

Suleiman continued Selim's expansionist activites, personally participating in 13 campaigns. This military activity was in part due to the nature of the state, since, without raiding, as the Sultan is said to have realized, the Janissaries lacked income and apolitical outlets for their energies. This was certainly a crucial...

More summaries and resources for teaching or studying Suleiman, I.

Suleiman, I from Gale. ©2005-2006 Thomson Gale, a part of the Thomson Corporation. All rights reserved.