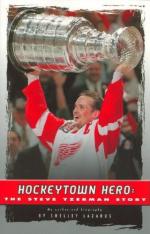 Get Steve Yzerman from Amazon.com
View the Study Pack

This Biography consists of approximately 17 pages of information about the life of Steve Yzerman.

Steve Yzerman--center for the Detroit Red Wings of the National Hockey League (NHL)--always loved hockey. As a child he daydreamed about skating around the ice carrying the most famous trophy in sports--the Stanley Cup. For 14 years he struggled to make his dream come true, only to fall short in a series of frustrating playoff losses. During the 1996-97 season--just when most hockey experts had given up on Yzerman--his grit and determination helped carry the Red Wings to their first Stanley Cup championship in 42 years. The next year, playing for two injured friends, he joined the greats of the sport when he led his team to a second-straight title.

Steve Yzerman (EYE-zer-man) was born May 9, 1965, in Cranbrook, British Columbia, Canada. He was one of five children of Ronald and Jean Yzerman. The family lived in Nepean, Ontario, a suburb of Ottawa, the capital...

More summaries and resources for teaching or studying Steve Yzerman.