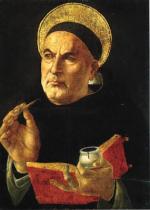 Get St. Thomas Aquinas from Amazon.com
View the Study Pack

This Biography consists of approximately 1 page of information about the life of St. Thomas Aquinas.

St. Thomas Aquinas was an Italian theologian and philosopher of the Dominican Order of the Catholic Church. He was educated or taught at Monte Cassino, the Universities of Naples and Paris, and the Theological School at Cologne. Aquinas wrote more than 60 works, some of which were massive in length. He is regarded as one of the greatest and most influential thinkers of the Catholic Church. He had an important influence on the intellectual awakening that occurred in western Europe during and after his lifetime. Previous to this time, from about 200-1200 C.E. (most of this period, from 500-1000 C.E., is now known as the Dark Ages), almost no important scientific advances had occurred in Europe or North Africa.

A central tenet of Aquinas' thinking and philosophy was that a omniscient (i.e., all-knowing), omnipotent (i.e., all-powerful) God had created the universe "out of nothing" (or ex nihilo. One of his major contributions to the development of scientific thought and methodology was advocacy of the idea that truth (or understanding) could be discovered through rational investigation of the natural world. As such, truth was not only the "word of God," as could be revealed by a literal interpretation of the Bible, which was commonly believed during those times. In other words, much could be learned about by the natural world by directly investigating organisms and phenomena. This so-called "rationalistic" approach to knowledge was crucial in the subsequent development of science as a way of understanding the natural world. It also fostered the development of a separation of scientific knowledge and speculation from the uncritical acceptance of the dogma of theology and the writings of such ancient natural philosophers as Aristotle.

St. Thomas Aquinas from Gale. ©2005-2006 Thomson Gale, a part of the Thomson Corporation. All rights reserved.