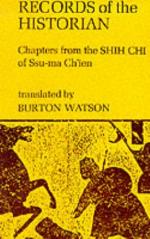 Get Ssu-ma Ch'ien from Amazon.com
View the Study Pack

This Biography consists of approximately 5 pages of information about the life of Ssu-ma Ch'ien.

Ssu-ma Ch'ien (145-ca. 90 BC), who has been described as the "Grand Historian of China," held the office of T'ai-shih, or director of astrology, in the imperial government. He completed a draft history of mankind started by his father.

In his capacity as court official, Ssu-ma Ch'ien became involved in political rivalries. He defended Li Ling, an officer who had led a force of infantry against China's enemies in central Asia. Li Ling had been fighting at a great distance from his base and had been forced to surrender after a prolonged and gallant struggle. For espousing Li Ling's cause, Ssu-ma Ch'ien suffered disgrace and punishment by castration.

The work produced by Ssu-ma Ch'ien and his father, Ssu-ma T'an, constitutes China's first systematic history. It was written as a matter of private initiative. Before this time a number of works had been written which can be regarded...

More summaries and resources for teaching or studying Ssu-ma Ch'ien.

Ssu-ma Ch'ien from Gale. ©2005-2006 Thomson Gale, a part of the Thomson Corporation. All rights reserved.