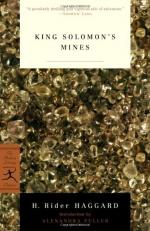 Get Solomon from Amazon.com
View the Study Pack

This Biography consists of approximately 2 pages of information about the life of Solomon.

Encyclopedia of World Biography on Solomon

Solomon (reigned ca. 965-ca. 925 BC) was a king of the ancient Hebrews. He rebuilt the city of Jerusalem and erected the first Hebrew temple there. His wisdom is proverbial.

Solomon was the youngest son of David and Bathsheba. He inherited an empire that extended in the northeast to the Euphrates, in the southeast to the Gulf of Aqaba, and in the southwest to the borders of Egypt and Philistia.

Solomon ruled as a grand monarch, supreme in power and regal in splendor. History and legend have endowed him with great gifts, of which his wisdom is the most famous. Impartial and eager for wisdom and understanding, he was famous as a wise and evenhanded judge. Three sections of the Bible are ascribed to his authorship: Proverbs, Ecclesiastes, and the Song of Solomon (Song of Songs).

The King's reign was a peaceful one. With consummate diplomatic skill he entered into numerous friendly alliances with the great powers of his time, often securing them through marriage. His most important marriage was with the Pharaoh's daughter. It secured peace on his southern border and kept the road open to Ezion-geber, site of his iron and copper refinery.

Solomon believed that his kingdom and especially his capital city of Jerusalem should reflect the power and glory of Israel's king. He undertook a series of elaborate building operations, fortifying the strategic and economic towns within his realm. In Jerusalem he built luxurious palaces, completed the defense wall around the city, and erected a magnificent temple on Mt. Moriah.

Solomon also sponsored industrial and commercial enterprises that brought him wealth. He built a great fleet, sending naval expeditions along the coast of the Red Sea and through the Mediterranean as far as Spain. He carried on an extensive caravan trade to Arabia and Egypt, developed copper and iron mines, and built refineries for smelting.

Heavy expenses caused Solomon to severely regulate the fiscal administration of Israel. The cost of maintaining his court necessitated the collection of extremely high taxes. To raise these taxes, he consolidated his administration, creating 12 new districts with royal officers in charge of each.

Despite the magnificence of Solomon's rule, the people were dissatisfied and harbored many grievances against him. His death was immediately followed by a rebellion of the northern tribes and the division of his kingdom.

More summaries and resources for teaching or studying Solomon.

Solomon from Gale. ©2005-2006 Thomson Gale, a part of the Thomson Corporation. All rights reserved.