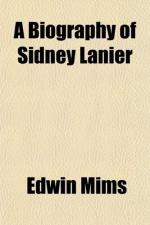 Get Sidney Lanier from Amazon.com
View the Study Pack

This Biography consists of approximately 2 pages of information about the life of Sidney Lanier.

The work of Sidney Lanier (1842-1881), American poet, critic, and musician, bridged southern romantic literature and 20th-century realism. He spent his life trying to convince America that poetry and music are governed by similar artistic laws.

Sidney Lanier was born in Macon, Ga., on Feb. 3, 1842, of Huguenot and Scottish parentage. As a child, he was devoted to music, concentrating on study of the flute. After graduating from Oglethorpe University, he tutored for a year, then joined the Macon Volunteers in the Civil War. He was captured in 1864. During his imprisonment he developed tuberculosis. Discharged, he walked home to Georgia, arriving dangerously ill. The rest of his life was a losing battle with bad health.

From 1866 to 1872 Lanier worked at a variety of jobs: bookkeeper-clerk in Montgomery, Ala., teacher in rural Alabama schools, lawyer in his father's Macon office, and novelist (Tiger-lilies, 1867, deals partly with his war experiences). He and his wife moved to San Antonio, Tex., in 1873 to recover his health, but to no avail. That same year he became first flutist in the Peabody Orchestra of Baltimore and began to work on Florida, a guidebook (1875).

Thereafter Lanier divided his time between music and poetry. He published two poems in Lippincott's Magazine (1876) and attended the Philadelphia premiere of his cantata, The Centennial Meditation of Columbia, written to Dudley Buck's music. After a few months in Florida for his health, he resettled his family in Baltimore. His Poems (1877) brought neither the sales nor the reputation he expected, so he turned to hack work for income--writing tales for boys from classical literature. The Boy's King Arthur (1882) was his best-selling book.

In 1879 Johns Hopkins University invited Lanier to lecture on Shakespeare, the novel, and his theories of prosody. When the appearance of The Science of English Verse (1880) did not bring an offer of a professorship from the university, he moved to the mountains of North Carolina. He died there on Sept. 7, 1881.

Lanier's reputation grew rapidly after his death. Two of his best-known poems, "The Song of the Chattahoochee" and "The Marshes of Glynn," are noted for their fluid measure and orchestral effects. Mrs. Lanier edited The English Novel (1883) from his lecture notes.

More summaries and resources for teaching or studying Sidney Lanier.

Sidney Lanier from Gale. ©2005-2006 Thomson Gale, a part of the Thomson Corporation. All rights reserved.