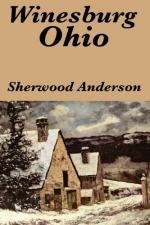 Get Sherwood Anderson from Amazon.com
View the Study Pack

This Biography consists of approximately 2 pages of information about the life of Sherwood Anderson.

The works of the American writer Sherwood Anderson (1876-1941) are graced by a psychological complexity absent from earlier American fiction. His stories stress character and mood, and his style is laconic and colloquial.

Sherwood Anderson was born on Sept. 13, 1876, in Camden, Ohio, the third of seven children. His father was an easygoing, improvident man whose itinerant habits resulted in spotty educations for his children. Sherwood had no formal education after the age of 14, although he did attend Wittenberg College for a short time.

Anderson had a belated writing career. He served in Cuba during the Spanish-American War, then began a successful business career in advertising. But it was while owning and managing a paint factory in Elyria, Ohio, that he began, about 1908, to write stories and novels.

The turning point in Anderson's life came in 1912, when, suffering from nervous exhaustion and amnesia, he suddenly deserted his factory. The...

More summaries and resources for teaching or studying Sherwood Anderson.

Sherwood Anderson from Gale. ©2005-2006 Thomson Gale, a part of the Thomson Corporation. All rights reserved.