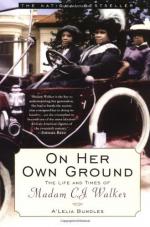 Get Sarah Breedlove Walker from Amazon.com
View the Study Pack

This Biography consists of approximately 2 pages of information about the life of Sarah Breedlove Walker.

Sarah Breedlove Walker, a St. Louis washerwoman, created a cosmetic empire by inventing a system of hair straightening. Born to a poor farm family on December 23, 1867, in Delta, Louisiana, Sarah received very little education and, by the age of ten, had moved away from home to look for work. By age nineteen Sarah was a widow with a young daughter to support, and she moved to St. Louis to work as a hotel washerwoman. In 1906, Sarah married Denver newspaperman Charles Joseph Walker and changed her name to Madame C. J. Walker.

Around 1910, Sarah came up with idea of straightening hair with a hot iron comb and an ointment to add softness and shine. This was an important development because for generations before her revolutionary process, blacks had straightened tightly curled hair on ironing boards which endangered the scalp and face and broke the hair. Sarah made up batches of her pomade in a tub, then packed the mixture in jars and sold them to customers. She developed a variety of products to serve a range of hair care needs.

To increase sales of her pomade, hair growing tonic, strengtheners, hot combs, toiletries, fragrances, and facial treatments, she peddled them door to door, then organized agents in "Walker Clubs." She opened a shop, trained assistants, then later added mail-order sales followed by a beauty school that taught the Walker Method of hair straightening and hair growing.

In 1910, she moved the operation to Indianapolis and built her first factory. By 1917, Sarah Walker was employing 3,000 workers in America's largest black-owned business and was drawing sizeable return from sales of equipment and supplies and from a chain of beauty schools. She became a social leader among the black middle class and opened Lelia College, a hair care laboratory, and a chain of beauty salons in Harlem.

Sarah Walker was a generous contributor to the National Association for the Advancement of Colored People ( NAACP) as well as to St. Louis and Indianapolis charities. She bankrolled scholarships for women at Tuskegee Institute, Bethune-Cookman College, and Palmer Memorial Institute and endowed black YWCA chapters and orphanages. She died from nephritison May 24, 1919.

Sarah Breedlove Walker from Gale. ©2005-2006 Thomson Gale, a part of the Thomson Corporation. All rights reserved.