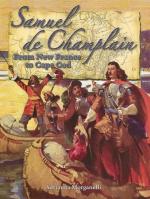 Get Samuel de Champlain from Amazon.com
View the Study Pack

This Biography consists of approximately 6 pages of information about the life of Samuel de Champlain.

Samuel de Champlain (ca. 1570-1635) was a French geographer and explorer whose mission was to establish a joint French and Native American agricultural and fur-trading colony. In 21 voyages to New France he laid the foundations for modern Canada.

Samuel de Champlain was born at Brouage, a small Huguenot seaport town in Saintonge. He was probably born a Protestant, but sometime before 1603 he embraced the Roman Catholic faith. He had served against the Catholic League in the army of Henry IV until 1598. By 1601 he was indulging his love of travel and the sea and extending his expertise in navigation.

Champlain spent time during 1601-1603 on voyages as far as the West Indies, working out of Spain. In 1603 he went, probably as an observer, with François Gravé du Pont, whom Aymar de Chaste, holder of the trade monopoly for New France from King Henry IV...

Samuel de Champlain from Gale. ©2005-2006 Thomson Gale, a part of the Thomson Corporation. All rights reserved.