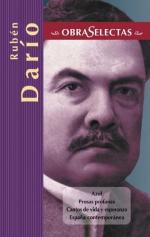 Get Rubén Darío from Amazon.com
View the Study Pack

This Biography consists of approximately 3 pages of information about the life of Rub&eacute;n Dar&iacute;o.

Rubén Darío (1867-1916) was a Nicaraguan poet whose work is considered to have given the major impetus to the late-19th-century literary movement in Spanish America called modernism.

Rubén Darío was born Félix Rubén García y Sarmiento on Jan. 18, 1867, in Metapa. Raised as an orphan in the home of an aunt, he showed at an early age an astonishing ability for versification. His early Jesuit training appears to have had little influence on his subsequent behavior, except perhaps to intensify his mystical inclinations. At 13, he published the first poem he was to sign as Rubén Darío, adopting the more euphonious last name of a paternal great-grandfather.

An intelligent, nervous, superstitious boy, Darío was taken by friends to the capital city of Managua in 1881. But in an...

More summaries and resources for teaching or studying Rubn Daro.

Rubén Darío from Gale. ©2005-2006 Thomson Gale, a part of the Thomson Corporation. All rights reserved.