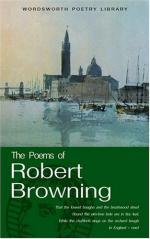 This Biography consists of approximately 4 pages of information about the life of Robert Browning.

The English poet Robert Browning (1812-1889) is best known for his dramatic monologues. By vividly portraying a central character against a social background, these poems probe complex human motives in a variety of historical periods.

Robert Browning was born on May 7, 1812, in Camberwell, London. His father, a senior clerk in the Bank of England, provided a comfortable living for his family and passed on a love of art and literature to Robert. His mother, an excellent amateur pianist, gave him a love of music, while her strong and simple piety provided him with an enduring conviction of the existence of God. In 1828 Browning entered the University of London, but he dropped out after half a year. The Brownings were a small, close-knit family and Robert apparently preferred to remain at home, reading in his father's library of over 7,000 volumes.

More summaries and resources for teaching or studying Robert Browning.

Robert Browning from Gale. ©2005-2006 Thomson Gale, a part of the Thomson Corporation. All rights reserved.