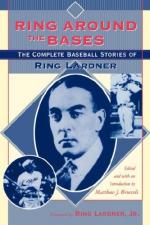 Get Ringgold Wilmer Lardner from Amazon.com
View the Study Pack

This Biography consists of approximately 2 pages of information about the life of Ringgold Wilmer Lardner.

Ringgold Wilmer Lardner (1885-1933), American writer, was an important literary humorist and the author of sports fiction. His stories are distinguished by a bitterly sardonic view of humanity. He has been called the "greatest and sincerest pessimist America has produced."

Ring Lardner was born on March 6, 1885, in Niles, Michigan The family was wealthy, and Lardner was privately educated until he entered high school. At his father's insistence, he entered engineering school in 1902 but soon flunked out.

Lardner began his career as a newspaperman in 1905 on the South Bend Times in Indiana. Two years later he went to Chicago and for the next dozen years was a sports columnist on city newspapers. In 1911 Lardner married Ellis Abbott; they had four sons.

While working for the Chicago Tribune in 1914, for the Saturday Evening Post Lardner conceived of a series of illiterate letters between a baseball pitcher and his wife. The...

Ringgold Wilmer Lardner from Gale. ©2005-2006 Thomson Gale, a part of the Thomson Corporation. All rights reserved.