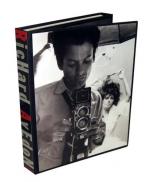 Get Richard Avedon from Amazon.com
View the Study Pack

This Biography consists of approximately 3 pages of information about the life of Richard Avedon.

The American fashion photographer Richard Avedon (born 1923) was best known for his probing portraits that go beyond recording likenesses to explore the identity of society and to reflect dreams and desires.

Richard Avedon was born in New York City on May 15, 1923. Educated in the New York City public school system, he left DeWitt Clinton High School without graduating. In 1942 he enlisted in the Merchant Marine's photographic section. Returning to civilian life in 1944, he worked as a department store photographer. A year later he was hired as a fashion photographer by Alexey Brodovitch, the art director of Harper's Bazaar. In 1946 he established his own studio and after that contributed photographs to Vogue, Theatre Arts, Life, Look, and Graphis.

More summaries and resources for teaching or studying Richard Avedon.

Richard Avedon from Gale. ©2005-2006 Thomson Gale, a part of the Thomson Corporation. All rights reserved.