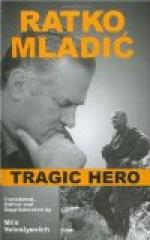 Get Ratko Mladic from Amazon.com
View the Study Pack

This Biography consists of approximately 5 pages of information about the life of Ratko Mladic.

Ratko Mladic (born 1943) led the Bosnian Serb fight in the Balkan war against Muslims, Croatians, and Serbians which began in 1991. Mladic's savage leadership is reported to have resulted in the deaths of thousands of soldiers and civilians alike, and he has been charged with war crimes.

General Ratko Mladic's forces led the assault on Sarajevo and the "ethnic cleansing" atrocities committed against Muslims. The region's history is marked by conflict among its inhabitants, and after the death of communist leader Tito who held the various ethnic groups together with his party apparatus, the nation known as Yugoslavia gradually eroded into hostilities.

Born in the tiny village of Bozinovici, 25 miles south of Sarajevo in Eastern Bosnia, on March 12, 1943, Ratko Mladic grew up in an environment filled with passionate nationalistic sentiments and a tradition of war. On his second birthday, Mladic's father, Nedja, died while fighting...

More summaries and resources for teaching or studying Ratko Mladic.

Ratko Mladic from Gale. ©2005-2006 Thomson Gale, a part of the Thomson Corporation. All rights reserved.