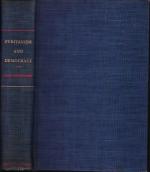 Get Ralph Barton Perry from Amazon.com
View the Study Pack

This Biography consists of approximately 2 pages of information about the life of Ralph Barton Perry.

The American philosopher Ralph Barton Perry (1876-1957) was a leader of the New Realist movement and the originator of the interest theory of value.

Ralph Barton Perry was born on July 3, 1876, in Poultney, Vt. He received his bachelor of arts degree from Princeton University in 1896 and his master of arts and doctor of philosophy degrees from Harvard University in 1897 and 1899. After teaching at Williams and Smith colleges, he joined the faculty of Harvard in 1902.

In 1910 Perry joined in the publication of "The Program and First Platform of Six Realists" in the Journal of Philosophy. The New Realist movement, which flourished during the first 2 decades of the 20th century, opposed idealism. New Realism claimed that the world is not dependent on the mind and that the knowledge relation is accidental or external to the object known.

Ralph Barton Perry from Gale. ©2005-2006 Thomson Gale, a part of the Thomson Corporation. All rights reserved.