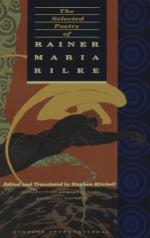 Get Rainer Maria Rilke from Amazon.com
View the Study Pack
Related Topics
Let This Darkness Be a Bell Tower

This Biography consists of approximately 5 pages of information about the life of Rainer Maria Rilke.

Rainer Maria Rilke (1875-1926) is considered the greatest lyric poet of modern Germany. His work is marked by a mystical sense of God and death.

Born in Prague on Dec. 4, 1875, Rainer Maria Rilke grew up in a middle-class milieu he called "petit bourgeois," of which he later felt ashamed. In spite of his sensitive, almost feminine nature, he was expected to become an army officer and was forced to spend 5 years (1886-1891) in the military academies of St. Pölten and Mährisch-Weisskirchen. After graduation from high school, he enrolled for a year as a student of literature at the German University of Prague (1895-1896) before moving away from his family. He continued his studies at the University of Munich for the next few years.

At 19 Rilke began his literary career by publishing at his own expense a collection of indifferent love poems, Leben...

Rainer Maria Rilke from Gale. ©2005-2006 Thomson Gale, a part of the Thomson Corporation. All rights reserved.