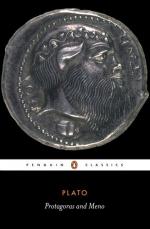 Get Protagoras from Amazon.com
View the Study Pack

This Biography consists of approximately 2 pages of information about the life of Protagoras.

Encyclopedia of World Biography on Protagoras

The Greek philosopher Protagoras (ca. 484-ca. 414 BC) was one of the best-known and most successful teachers of the Sophistic movement of the 5th century BC.

Protagoras was born in Abdera, the native city of Democritus, and spent much of his life as an itinerant Sophist, traveling throughout the Greek world. He was a frequent visitor to Athens, being a friend of Pericles, and was said to have aided in framing the constitution for the colony of Thurii, which the Athenians established in southern Italy in 444/443 BC. Plato said that Protagoras spent 40 years teaching and that he died at the age of 70. Stories about an indictment against Protagoras by the Athenians, the burning of his books, and his death at sea are probably fictitious.

Protagoras earned his livelihood giving lectures and instruction to individuals and groups. The system he taught had little to do with philosophy or...

More summaries and resources for teaching or studying Protagoras.

Protagoras from Gale. ©2005-2006 Thomson Gale, a part of the Thomson Corporation. All rights reserved.