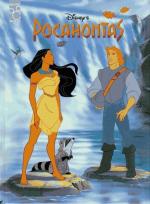 Get Pocahontas from Amazon.com
View the Study Pack

This Biography consists of approximately 2 pages of information about the life of Pocahontas.

Encyclopedia of World Biography on Pocahontas

Pocahontas (ca. 1595-1617) was the daughter of a Native American chief in Virginia at the time of its colonization by the British. Her marriage to an English settler brought eight years of peace between the Indians and the British.

The real name of Pocahontas was Matoaka. As a child, she was called Pocahontas, meaning "playful one", and the name stuck. Her father was Powhatan, chief of a confederation of Algonquian tribes that bore his name.

In 1607 English colonists sent by the Virginia Company founded Jamestown. Pocahontas often played at the fort. In 1608, according to a story of debated authenticity, she saved the life of Capt. John Smith, who had been captured by Powhatan's warriors and was to be clubbed to death. The salvation of John Smith was the salvation of Jamestown colony.

Relations between the Native Americans and the colonists were not smooth in Virginia, however. In 1613, while...

More summaries and resources for teaching or studying Pocahontas.

Pocahontas from Gale. ©2005-2006 Thomson Gale, a part of the Thomson Corporation. All rights reserved.