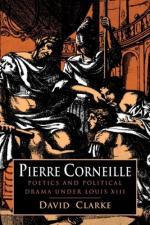 Get Pierre Corneille from Amazon.com
View the Study Pack

This Biography consists of approximately 4 pages of information about the life of Pierre Corneille.

The French dramatist Pierre Corneille (1606-1684) wrote more than 30 plays and is often called the father of French tragedy. His tragedies characteristically explore the conflict between heroic love and heroic devotion to duty.

Pierre Corneille was born on June 6, 1606, in Rouen. Educated in the Jesuit school of the city, he completed law studies and became a lawyer there in 1624. In 1628 his father purchased for him, according to the custom of the times, the post of king's advocate in Rouen. Corneille continued for many years to discharge his legal duties as king's advocate, but his real interest was literature. At some time between 1625 and 1629 he wrote the comedy Mélite, which was taken up by a traveling theatrical troupe and subsequently presented in Paris, where it was an immense success.

In 1629 the French theater was moving away from the exuberant baroque style of the early...

More summaries and resources for teaching or studying Pierre Corneille.

Pierre Corneille from Gale. ©2005-2006 Thomson Gale, a part of the Thomson Corporation. All rights reserved.