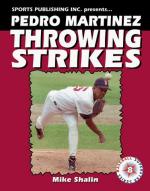 Get Pedro Martinez from Amazon.com
View the Study Pack

This Biography consists of approximately 10 pages of information about the life of Pedro Martinez.

"Baseball is in my family. It's in my blood."--Pedro Martinez.

To Pedro Martinez, the hard-throwing right-handed pitcher of the Boston Red Sox, baseball is a family affair. He and his brother, Ramon, both came to the United States as members of the Los Angeles Dodgers and pitched together in the major leagues in 1992. Pedro was traded to the Montreal Expos in 1993 and went on to stardom, winning the 1997 National League Cy Young Award as the best pitcher in the league. In 1998 Martinez won 19 games for the Boston Red Sox and led that team to the playoffs. A tough pitcher who is not afraid to throw inside, Martinez has established himself as one of the most dominating hurlers in the major leagues.

Pedro Martinez was born October 25, 1971, in Santa Domingo, Dominican Republic. He was the fifth of six children of Paulino and Leopolinda Martinez...

More summaries and resources for teaching or studying Pedro Martinez.

Pedro Martinez from UXL. ©2005-2006 by U•X•L. U•X•L is an imprint of Thomson Gale, a division of Thomson Learning, Inc. All rights reserved.