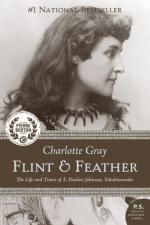 Get Pauline Johnson from Amazon.com
View the Study Pack

This Biography consists of approximately 5 pages of information about the life of Pauline Johnson.

Pauline Johnson (1861-1913) was the first Native American poet to have her work published in Canada and was one of the few women of her time who succeeded in supporting herself from her writings and recitals. Thousands of Canadian schoolchildren have read her poem "The Song My Paddle Sings."

Johnson was unique in her time because she recited her own work rather than that of others. Her recitals of her own poems, anecdotes, and plays were a refreshing change for American and Canadian audiences whose usual theatrical fare was Shakespeare or Ibsen. Johnson was never able to make much money from her writing, and most of her income came from her speaking tours.

Emily Pauline Johnson was born on March 10, 1861, near Brantford, Ontario. She was one of four children born to George Johnson, a Mohawk chief on the Six Nations Indian Reserve, and Emily Howells, a...

More summaries and resources for teaching or studying Pauline Johnson.

Pauline Johnson from Gale. ©2005-2006 Thomson Gale, a part of the Thomson Corporation. All rights reserved.